Summary: Yuta and Ritsu have been playing baseball together since they were children, but after being defeated in a local tournament over the summer, they must retire from the high school team to study for university entrance exams. Still, Yuta finds himself unable to give up his lingering attachment to baseball. The one person who can truly understand him is Ritsu, who has been acting worryingly distant since they quit the team. But there’s something Yuta himself doesn’t understand… Does he think of Ritsu as his partner in the way that a teammate would, or is the affection between them something stronger?

Thoughts: As I mentioned in my previous manga review, I used to be into BL stuff a lot more than I am, before I realized that the genre contains a lot of problematic tropes that really made me uncomfortable. But still, every once in a while, I try again to rediscover my old interest in the genre, partly because I’m nostalgic, but partly because I want to read more stuff that has queer romances.

(Even if that can bring its own set of problems, depending on who’s doing the writing…)

Even though I don’t have any interest in baseball, there was something about Re:Play that called to me from the outset. I couldn’t say what. But I’m glad I did, because a lot of the tropes that I came to dislike over the years were pretty much absent from this standalone manga volume. Both Yuta and Ritsu are in their final year of high school, dissimilar personalities but great friends, to the point where people joke that they’re “an old married couple.” Ritsu is serious, Yuta is more happy-go-lucky. They both aim to get into the same university, though things are less secure in that regard with Yuta, since he still has his sights set on playing baseball, and his grades might not be good enough to get into his university of choice. The typical high school drama, essentially. 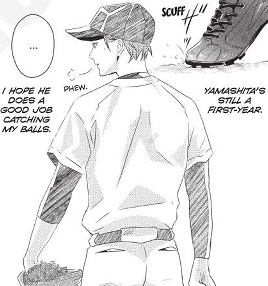 Also some great opportunities to make jokes about balls.

And how possibly for the first time, the terms “pitcher” and “catcher” are used un-euphemistically.

Typical, too, is the changing dynamic of their relationship once it’s revealed that Ritsu has been harbouring feelings for Yuta, and Yuta’s all, “Oh, okay, I guess that’s sort of what I feel for you too, only I didn’t really know it, but it sure does explain why I get jealous over the idea that you might have a secret girlfriend!” But it also touches on the idea that longtime friends can change as they grow up, and the worry that there might not always be a place for you in your old friend’s new life. Bittersweet as that is, I liked that the manga touched on that.

I mentioned that some common tropes were absent from Re:Play, and the most obvious one is that neither Yuta nor Ritsu are coded girls. By which I mean, there’s usually one of the pairing that’s decidedly more “feminine” than the other, to make it clear to the reader who takes which role in the relationship. Rarely have I seen BL manga that portrays guys who are written as any other guy would be, only in love with another guy. But Re:Play is one of those uncommon offerings that does this, and I loved seeing it. Yuta definitely has the less serious personality, but he’s a far cry from being feminine-coded, and it was great to see. Their budding romance was cute, without the trappings of outdated gender roles applied to the wrong gender.

Re:Play is definitely more on the BL side of things than the yaoi side, but there are some sexytimes in the manga’s final pages. It’s about as graphic as most yaoi, with certain parts being essentially consumed by a white void, but, er, you get the idea pretty clearly. It’s nothing over the top, and relatively tasteful, at least within the yaoi genre. Believe me, I’ve seen worse!

If you’re looking for a sweet BL story about two guys navigating the early parts of their romance while also navigating an life-altering period of their youth, and you could definitely do worse than reading Re:Play. Even if you’re not a fan of baseball, which is a big part of the characters’ lives, chances are you’ll still enjoy how Yuta and Ritsu enjoy it and how it plays into their lives. I was surprised at how much I ended up liking this one.

And if nothing else, maybe you too will become better at catching someone’s balls.

(Book received in exchange for an honest review.)

Summary: Yuujirou Matsukaze has been close friends with Rui Hanamine since the two of them were children, and at that time, Yuujirou was the one who stood up for and took care of his adorable, soft-hearted friend. But as it turns out, Yuujirou’s childhood dreams end up growing a little too big to handle ― or, rather, too tall! At over six feet in height, the cheerful and happy-go-lucky Rui towers over his would-be protector… and still has no idea Yuujirou’s had a crush on him since they were kids!

Thoughts:I used to read a lot of yaoi and BL manga back in the day, but over recent years have been somewhat turned off the genre due to its formulaic and occasionally anger-inducing storytelling. I found that the vast majority of BL and yaoi fell into one of two categories:

I can, at least, say that Dekoboko Sugar Days only fell into the first category. Rui was definitely the feminine-coded one in this story, being cute, enthusiastic, open with his emotions, wearing a hair clip (which was, ostensibly, to advertise his sister’s store), and and the one who, as a child, needed help getting out of scrapes. Later, his concern that his boyfriend might only want him for his body and not for his personality.

Now, that isn’t to say that men never have such concerns in their lives. But there’s a large amount of BL manga out there where you can see the outdated concepts of, “Which one is ‘the woman’?” at work, and unfortunately, Dekoboko Sugar Days does play with this trope.

The story itself is pretty cute, though. Two guys, childhood friends, each trying to come to grips with what it means to be attracted to each other. There are the usual misunderstandings (“I had a crush on him early on but mistook my feelings for something else,” “I feel awful that he has a girlfriend and don’t understand why I feel so bad about it,” etc), and it never really breaks out of any established comfort zones, but it was a pretty cute story within those limits, I have to admit.

One of the reasons I’m not giving this a star/teacup rating here on the blog is because, well, Dekoboko Sugar Days treads a very well-worn path, not really telling a new story but instead sticking to the tried-and-true. And if you like that sort of thing, then great, because this manga doesn’t break any new ground in that regard. It will give you the exact kind of story you already know you like. And I think a lot of BL manga is the same way. This makes it really difficult for me to rate, honestly, because while I was hoping to see something I hadn’t seen already done dozens of times over a decade ago, it still does that particular job well enough.

Though one area that did manage to surprise me was the way it went from the whole “discovery” phases of Yuu and Rui’s relationship to full-on sex. Again, it might just be my own experience, but a lot of manga that I’ve read has tended to keep the two things apart. You’ve either got stuff that’s focused on sex, or you’ve got stuff that’s about the adorable romantic stuff. Dekoboko Sugar Days acknowledged that teenage boys get horny and might want to have sex, but their entire lives aren’t necessarily consumed by it, and they don’t always discover they have an attraction to someone by getting surprise boners around them. So I will give credit where credit is due there.

So in the end? A cute story about two guys discovering and understanding their feelings for each other, which didn’t break any molds or do anything original, but that didn’t stop it from still being cute. It was a nice fluff read, nothing too taxing, on a snowy winter morning.

(Still, hopefully my next read during Manga Month will be a bit more than mere fluff…)

(Book received in exchange for an honest review.)

Any books received by the publisher or author for review will be noted as such. Any books without this notification are owned by me or were borrowed from friends or the library. All reviews here are my honest opinion, uninfluenced by the manner in which I obtained the book, and no money was provided in exchange for me writing said reviews.