Buy from Amazon.com, B&N, or IndieBound

Summary: Beneath the mountain, the king’s reign of tyranny is absolute; the one troll with the capacity to challenge him is imprisoned for treason. Cécile has escaped the darkness of Trollus, but she learns all too quickly that she is not beyond the reach of the king’s power. Or his manipulation.

Recovered from her injuries, she now lives with her mother in Trianon and graces the opera stage every night. But by day she searches for the witch who has eluded the trolls for five hundred years. Whether she succeeds or fails, the costs to those she cares about will be high.

To find Anushka, she must delve into magic that is both dark and deadly. But the witch is a clever creature. And Cécile might not just be the hunter. She might also be the hunted…

Thoughts: Following up on Danielle Jensen’s hit YA novel, Stolen Songbird, Hidden Huntress continues the story of Cecile and Tristan, and the trolls that influence their lives. Cecile is in Trianon, following in her mother’s social footsteps and building her social and musical career while at the same time searching for Anushka, the woman who cursed the trolls so many centuries ago. Tristan is still trapped in Trollus, reviled by half-bloods and full-bloods alike for his deception, trying to regain influence and uncovering some disturbing truths along the way. The troll king wants freedom, wants Anushka’s curse broken, and Angouleme wants control of the throne. Politics and prophesy come to a head as the layers get peeled back and the mystery comes undone.

It’s interesting to see Cecile and Tristan far apart for the better part of the book. With the two of them being magically bonded, they remain aware of the other’s strong emotions, which influence them in various ways. Tristan’s pain from having iron spikes shoved through his arms affects Cecile’s health and energy. Cecile’s bonded vow to the troll king to find Anushka brings Tristan to desperation, and the two feed off each other in a mostly detrimental way. I actually liked the way this was handled quite a bit, since it was a major inversion of how most psychic bonds are done in fiction, especially between two people in love. Most of the presentation of that bond were actually quite detrimental. The bond doesn’t stop someone from cheating on their partner, for instance, but it does make the partner aware of what’s going on, and the cheater feels the emotional pain of the one they’ve wronged. The death of one is often the death of the other. Often you see such bonds as romantic and wonderful, but here it was shown to have as many or more drawbacks as it has benefits.

The mystery of Anushka was an interesting one. Who is she? Where is she? How has she lived for so long? Cecile’s sections were highly focused on that investigation, and it was fun to see where all the clues went. I started to form my own theories on Anushka’s identity about halfway through the book (and I’m glad to see that I was right in my theory!), but even though I saw that big reveal coming from a distance, the way all the pieces fit together in the end still surprised me now and again, and here were a few times I put things together only a page or two before it was said outright. I love it when mysteries can do that, and I think Jensen’s got a great talent for writing the exact sort of mystery I like best.

In the same vein, I also love how Jensen added sympathy to Anushka by revealing more of her backstory, and from her point of view. Why she did what she did, how she was wronged so many centuries ago, and why she started on her path to revenge. I love shades-of-grey villains like that, ones who do terrible things but still have their reasons for it. Better still, reasons that even her opponents – Cecile, Tristan, and the readers themselves – can understand and to a degree agree to. But rather than taking that to extremes and presenting Anushka as the wronged misunderstood party, she was still very much a villain. I agree with Cecile when she said that Anushka deserved to get revenge for what was done to her, but that doesn’t erase the fact that she’s a murderer and someone who has punished an entire race for the wrongs of a few individuals. I adored this scene in the novel, where all of that is revealed; it’s probably one of those most powerful and moving scenes in the whole novel.

Also of note, I really liked Cecile’s character development in Hidden Huntress. While she wasn’t exactly a timid little mouse in Stolen Songbird, she’s grown in some very interesting ways, and much of that comes from the situations she’s confronted as the story progressed. Her encounters with blood magic influence her very strongly here, as she twice chooses to do a terrible thing that sickens her in order to get the needed power to do what is expedient rather than take the slower and less certain path. I do like that the story didn’t devolve into some personal battle to stop using blood magic, though, since while that’s an interesting enough journey for a character to take, I feel it would have weakened the rest of the story as a whole, adding a dimension that didn’t need to be added. So Jensen gets much praise from me for being able to walk that balance well.

But incidents like that did seem to prepare Cecile for moments when the right thing to do was also the horrible thing to do. (Spoiler alert: such as sticking a knife between her own mother’s ribs to prevent her mother from killing someone else.) A brilliant ending to a very moving scene, and a fantastic expression of the woman Cecile has become over time. Painful, emotional, and necessary.

The novel ends on a cliffhanger, and what a cliffhanger it is! But it doesn’t leave the main plot thread dangling; that’s wrapped up very nicely, and the cliffhanger ending is much more a consequence of what happened in the novel rather than an attempt to drag the events out further. Between this, and Stolen Songbird itself, it’s easy to see why Jensen is making such waves in the YA genre. Her writing is gorgeous, the plot tight and well-paced, villains you love to hate, and characters who are fantastically unique and not without many the many flaws that make a person a person. Suffice it to say that I’m already looking forward to the next book! This series is a definite stand-out in a saturated genre, rekindling interest and giving me greater respect for the gems that can be found on the YA shelves.

(Received for review from the publisher.)

Last year, Danielle L Jensen’s Stolen Songbird impressed me with its take on troll myths, and I found myself pretty quickly looking forward to the sequel. Lucky for me, the end of my waiting is now in sight, and I’m pleased and privileged to be able to present to you the cover art for the anticipated Hidden Huntress! 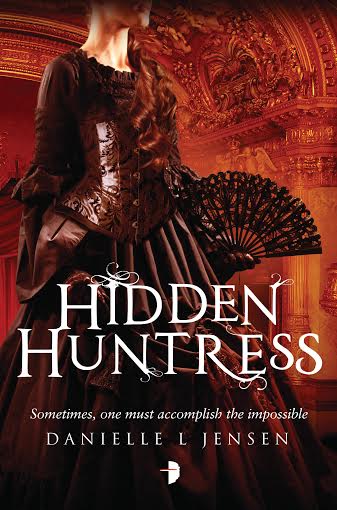 Beneath the mountain, the king’s reign of tyranny is absolute; the one troll with the capacity to challenge him is imprisoned for treason. Cécile has escaped the darkness of Trollus, but she learns all too quickly that she is not beyond the reach of the king’s power. Or his manipulation.

Recovered from her injuries, she now lives with her mother in Trianon and graces the opera stage every night. But by day she searches for the witch who has eluded the trolls for five hundred years. Whether she succeeds or fails, the costs to those she cares about will be high.

To find Anushka, she must delve into magic that is both dark and deadly. But the witch is a clever creature. And Cécile might not just be the hunter. She might also be the hunted…

Hidden Huntress has an anticipated release of late spring 2015, coming from Angry Robot, and I’m very excited to be able to read it soon so that I can continue my exploration of an interesting YA series!

Any books received by the publisher or author for review will be noted as such. Any books without this notification are owned by me or were borrowed from friends or the library. All reviews here are my honest opinion, uninfluenced by the manner in which I obtained the book, and no money was provided in exchange for me writing said reviews.
Loading Comments...