Summary: (Taken from GoodReads) Finn looks and acts human, though he has no desire to be. He was programmed to assist his owners, and performs his duties to perfection. A billion-dollar construct, his primary task is now to tutor Cat. As she grows into a beautiful young woman, Finn is her guardian, her constant companion…and more. But when the government grants rights to the ever-increasing robot population, however, Finn struggles to find his place in the world, and in Cat’s heart.

Thoughts: Written by Cassandra Rose Clarke, I expected an interesting YA novel when I first started reading this book. What I was presented with, however, was a life-spanning romance set in the near-future, a book with one of the most realistic and thus most inspiring characters I have ever read, and as much as I normally don’t care much for romance novels (because that’s exactly what this is, although it’s presented in a way that definitely separates it from other contenders), I ate this up. And wanted more. When I find an author that can write something I normally wouldn’t enjoy and yet I want more, I know I’ve found an author I need to follow.

The story follows Cat from the tender age of 6 and her first meeting with Finn, whom Cat believes to be a ghost but who is actually a very human-like android. Skipping ahead a few years to Cat as a teenager, we see her experience growing pressure from her mother to be more ‘normal’, and Cat’s simultaneous attempts to rebel (by refusing to give up her growing crush on Finn) and attempts to comply by dating a boy she doesn’t much care about, going to parties, and trying to live a typical teenage life.

It’s this that makes Cat so wonderfully believable for me, and makes me want to heap the author with praise. In adulthood, Cat ends up working a dead-end job to pay the bills while she pursues her art career. She marries a man she doesn’t much love because she’s attempting to do the normal and ‘right’ thing. Unlike many novels, especially ones that are marketed as YA (which this one is in spite of Cat spending the bulk of the novel being in her 20s and 30s), she doesn’t meet the love of her life and stick with him against impossible odds. She makes mistakes. Her life isn’t great. She’s not startlingly normal. Things don’t end with a happily-ever-after when she’s 18, but instead mostly start to come together when she’s in her early 30s, and even then she suffers from very normal and relatable grief and problems. The near-future world she grows up in is not post-apocalyptic, is not dystopian, is not full of the colonization of distant planets. It’s relatable, it’s believable, and I could empathize with Cat more than I think I’ve been able to empathize with a character in a very long time.

This book essentially being a romance novel, you know there’s going to be a happy ending. Or rather, you know that in the end, Finn and Cat will be together. That much stays in your mind, no matter what trials the two go through and no matter what separates them, because that’s just what romance novels do. But that knowledge feels very much like the hope that Cat herself clings to throughout the book, a wish and a dream that somehow it’ll work out all right even when she doesn’t know how, even when she’s struggling with death and illness and loneliness. Cat is the kind of romance heroine that most of us could be. Not perfect. Not happy. Not living the dream. Knowing that following your dream usually means sacrifices. Making the best of a bad situation. And getting through life.

If this book has any flaw, it’s in the way that the writing feels largely distanced from what events it’s telling about. There’s a disconnect in there. On one hand, it’s somewhat forgivable, because the story is long and spans decades and Cat herself has a tendency to shut down, emotionally, when things get hard. On the other hand, that doesn’t diminish the fact that you read the novel feeling like you’re just watching it all happen from a safe distance, not that you’re trust into the centre of the events themselves. Intentional, I’m sure, but there are times I wish there had been more of a connection between the writing and the story, so to speak.

Aside from providing me with an interesting story and a couple I could seriously cheer for, The Mad Scientist’s Daughter made me want to get back into the fibre arts I’ve long neglected since starting to do book reviews. It isn’t often that I come across a book that so greatly inspires me like this. Though at first blush it looks like the kind of book I wouldn’t bother with, I can safely say that I’ve had my expectations blow out of the water, and I’m very glad that I took the time to enjoy this book. Highly recommended for fans of realistic romances and coming-of-age stories. 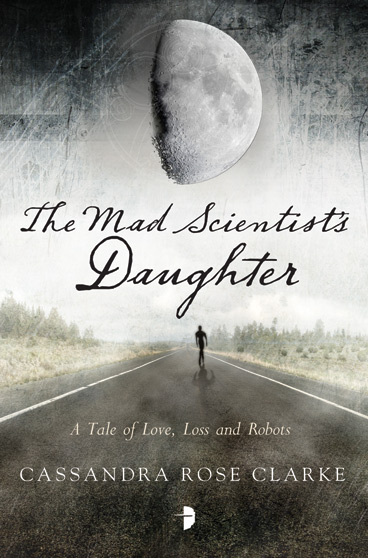 There’s never been anyone – or anything – quite like Finn.

He looks, and acts human, though he has no desire to be. He was programmed to assist his owners, and performs his duties to perfection. A billion-dollar construct, his primary task is to tutor Cat.

When the government grants rights to the ever-increasing robot population, however, Finn struggles to find his place in the world.

Due to be published by Angry Robot books in February of 2013, this book is one that came to the publisher through their Open Door month, and apparently had editor Lee Harris unable to leave the train station until he had finished reading it.  Even if it hadn’t been for that endorsement, the synopsis alone would have had me interested. Stories about robots are nothing new, but stories about robots coming to grips with their own sense of being? Now that’s something I can sink my teeth into!

The cover art has a really interesting feel to it, too. The mostly greyscale and muted colours make for a really stark and lonely image, even without the symbolism of a figure walking down an empty road.

Keep your eyes out for this one early next year. I know I will be!

Any books received by the publisher or author for review will be noted as such. Any books without this notification are owned by me or were borrowed from friends or the library. All reviews here are my honest opinion, uninfluenced by the manner in which I obtained the book, and no money was provided in exchange for me writing said reviews.
Loading Comments...