Kicking off the year-end countdown lists that you knew were going to start appearing here at some point soon, we have Django Wexler talking about the books he’s most looking forward to in the upcoming year. Thanks to him and the Ragnarok Publishing team for this guest post and including me to the holiday blog tour! 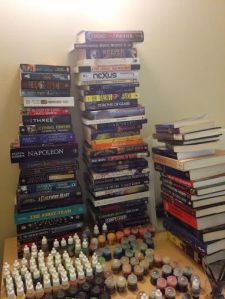 In a way it’s a little weird for me to write about my most anticipated books, because I have so many books in my “to read” pile that I often don’t get to things until months or even years after they’re released.  (Blogger’s note: I see Nexus in that pile, and I recommend that! It’s awesome!) Nevertheless, there’s always a few that I’m willing to bump to the top of the stack as soon as they come out.

To get the obvious out of the way first, there’s my books, The Mad Apprentice and The Price of Valor, in April and July respectively.  I’m also part of some great anthologies that I’m really looking forward to seeing: Blackguards from Ragnarok Publications should be a lot of fun, and Operation Arcana has some awesome military fantasy stories from some of my favorite authors.  Equally obviously, if Pat Rothfuss releases Doors of Stone or George R. R. Martin puts out The Winds of Winter next year, I’m going to be all over them.

Now that we’re past the blatant self-promotion:

-Brian McClellan and I have been linked by inscrutable fate ever since his flintlock fantasy book came out around the same time as mine.  The third book in his excellent Powder Mage trilogy, The Autumn Republic, comes out next year and I’m very much looking forward to seeing how he wraps it up. (First book: Promise of Blood.)

-I’m a big fan of everything Joe Abercrombie has done to date, and liked the start of his new series Shattered Sea quite a lot.  The second book, Half the World, should be out in 2015, and I’ll be snapping it up. (First book: Half a King.)

-James S. A. Corey’s (a.k.a. Ty Franck and Daniel Abraham) Expanse series seems to get better with each book.  It’s near(ish) future SF, mixing a “hard SF” respect for the laws of physics with aliens and other cosmic awesomeness.  The fifth book, Nemesis Games, comes out in 2015, and the TV series is starting up soon; this is your last chance to say you read the books first!  (First book: Leviathan Wakes.)

-Max Gladstone, in addition to being the most interesting person to hang out with at any given con, is writing a weird, wonderful series called the Craft Sequence.  It’s a high-fantasy stew with gods and magic standing in for high finance, where the fate of pantheons is determined by investments and Ponzi schemes and corporations will construct a deity to suit.  Awesomeness, in other words.  The fourth book, Last First Snow, comes out next year.  (First book: Three Parts Dead, although reading in order is not required.)

-I’m intrigued by Ian Tregillis’ new book, The Mechanical, which sounds like steampunk from the point of view of an clockwork automaton.  His previous series, The Milkweed Triptych, was a fun Nazi- superheroes-versus-British-warlocks romp through an alternate WWII, starting with Bitter Seeds, so I’m on board for wherever he goes next.

-Goodreads claims The Annihilation Score, the next in Charles Stross’ Laundry Files, comes out in 2015, though there aren’t many details.  I love that series — it’s the British intelligence system, with all the bureaucracy of a government office, in a world of Lovecraftian horror.  If it really is coming out, I’ll be reading it ASAP.  (First book: The Atrocity Archives.)

-Finally, the only one of this list that I’ve actually had a chance to read, thanks to the good people at Orbit.  I’m about three-quarters of the way through Alex Marshall’s debut novel A Crown for Cold Silver, and it’s excellent.  Very dark fantasy with a cynical, sarcastic edge in a detailed, fascinating world.  If you’re a fan of Joe Abercrombie or Mark Lawrence, I highly recommend taking a look when this comes out.

There’s many more good things to come, obviously.  But if I get too greedy, that mountain is going to collapse on me…

Django Wexler graduated from Carnegie Mellon University in Pittsburgh with degrees in creative writing and computer science, and worked for the university in artificial intelligence research. Eventually he migrated to Microsoft in Seattle, where he now lives with two cats and a teetering mountain of books.

He is the author of Roc’s military ‘flintlock fantasy’ The Thousand Names and the middle-grade fantasy The Forbidden Library.

When not writing, he wrangles computers, paints tiny soldiers, and plays games of all sorts.

Welp, thanks for making my own TBR pile explode! (Actually, many of the books mentioned are books I already want to read, or at least the first books in the series are, so I suppose it didn’t explode too badly.)

Now for a holiday bonus, thanks to the good people at Ragnarok, I’m pleased to announce that there’s a giveaway attached to this guest post! Who wants to win copies of the first 2 of Django Wexler’s John Golden novellas? (Trick question; I know the answer is “all of you.”) Comment on this post to be entered for your chance to win both of them!

Rules
~ 1 entry per person
~ Comment on this post to enter, letting me know at least 1 of the books you’re looking forward to in 2015.
~ Open to anyone who can accept e-books
~ Contest closes at 11:59 PM, PST, Thursday December 18.

Get commenting! I want to know which books you’re all excited about!

15 comments on “GUEST POST: Django Wexler’s Most Anticipated Books of 2015”