Craig Cormick, author of the upcoming novel, The Shadow Master, was awesome enough to drop by with a guest post about the challenge of creating a fantasy based on actual history, rather than starting from the ground up with a brand new secondary world. 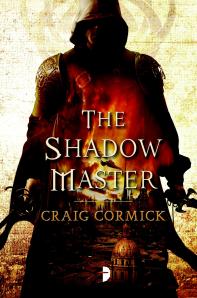 So I’ve been set a challenge: to talk about the issues involved in creating a world based on history, instead of world-building from scratch, for my novel The Shadow Master.

But first a quick description of the novel. It’s a kick-arse tale of alternative history,  love and conflict, madness and magic, with sword fights and mad clerics and assassins  and bombs and magical shape-changers and dark catacombs and tall towers and an  army of plague people – with everything except a car chase. And through it all is this  mysterious figure, the Shadow Master, who is manipulating everyone towards his own ends.

Sound interesting? I hope so.

And it’s set in Renaissance Italy – well sort of. Because the premise to my book is that  the world is one where science works like magic.

My day job is as a science communicator, and I’ve been lucky enough to travel to lots of interesting places, including Antarctica for work – but a few years back I was at a conference in Florence in Italy, and while walking around the Galileo museum I got this idea – like one of those serendipitous moments that just appear in your head – pow! I thought, what if science behaved like magic?

I mean, what if, when Galileo invented the telescope, it actually transported you across to what you were looking at. And what if the early chronometers actually slowed down time? And what if when you strapped on Leonardo da Vinci’s flying harness you actually transformed into a giant bird?

And that became my task – to create an alternate history world that was fairly similar to the world that readers knew from history, but was also different enough to be intriguing – but to work within itself.

And that’s the tricky thing with alternate history – the whole thing has to be believable, even though it’s playing around with known realities. And if you read some alternate histories you quickly find it’s a balancing act. If you tip too much to one side, then it starts becoming too far off the path from history and you lose people who want that element of historical certainty, and if you tip too far the other way, you’re seen as not being alternate enough and not challenging the reader.

I’ll tell you a story that I use to explain the writing of alternate history. When I was studying music growing up, my jazz teacher used to tell me that you need to learn all the rules of music before you start breaking them and improvising. So you really need to do your research and find out what the world was actually like in the time era you are writing of, and then you can start breaking the rules and introducing new elements.

And creating an alternate Renaissance where science works as magic is not too large a step for most readers to make, and I can use most of the known facts about the era in the story. That includes all the things I would find out about the politics of leading families and the power of the Church and so that could be maintained, giving the story broader credibility by capturing the atmosphere of the era. Most of my books deal with history or interpretations of history, and I’m fairly comfortable doing background research for things like this. And to be honest, I didn’t know too much about the Italian Renaissance beforehand and had to do a bit of reading on it. But I enjoy that, and, importantly, I think I know when to stop collecting research and start writing.

Anyway – If, however, I’d gone down a path where the leading Medicci family were all aliens in the bodies of humans, it would be creating an alternate world that was more than a few steps away from the familiar, and I would need to create a lot more reasoning to support that and probably have to step a lot further off the known historical paths to make it work and not seem just a little bit ridiculous.

I actually find the concept of world-building from scratch a more daunting one, as it seems to me like building a large tower of balancing blocks and every new one you put in holds up another one and if you get just one wrong it all falls down – when there are inconsistencies in the world. The worlds I create in alternate history as based on pre-existing towers that are fairly solid and I’m just adding extra blocks here and there and at much less risk of it all falling down.

Incidentally a highlight of the Galileo museum in Florence, if you ever get to go there, is finding Galileo’s mummified middle finger in a glass jar, turned to point at the maincathedral in the city. Payback for all the persecution he received from the Church. Check it out.

Craig Cormick has traveled all over the world for work (including Antarctica!), and aims to sail the seven seas next. He has published over 100 short stories and over 15 books. He has lived in a varied and interesting life, and hopes that it is reflected in his works. He currently lives in Canberra, Australia, and can be contacted via his website.

Stay tuned later today for my review of Craig Cormick’s novel, The Shadow Master, coming from Angry Robot on June 24 to a bookstore near you!