I’ve finished reading all of Mercedes Lackey’s Valdemar novels. The only books in the series that I haven’t read all of are the collections of short stories, but given that they’re not core novels and much of them may or may not be canon, I think I can safely say that I’ve read the series from beginning to end. They weren’t always great books. Some I enjoyed more than others. Some I enjoyed largely due to nostalgia value, which, even when they were good on their own, bumped them up another notch in my mind. It can be hard to be objective with such books, but hey, I figure that even if they may be flawed, my enjoyment level is part of the experience and thus ought to be factored into any rating I give them.

Or so I tell myself. 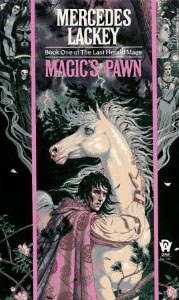 Anyway, I’ve loved this series since I was first exposed to it. From those days way back in high school when a friend handed me a copy of Magic’s Pawn and told me she thought I’d like it, to now when I’ve read all the novels that the series has to offer, I’ve been hooked. Not just on the books, but on the world itself. The very idea that Mercedes Lackey created. I’ve convinced others to read the books, then spent hours talking about them, leading to RP sessions in which we create characters and make up the plot as we go.

So, why? What is it about this series that pulled me in so strongly and won’t let me go even if I wanted to be free?

For one thing, the world that Lackey created is so relentlessly optimistic. Not in the over-the-top way where everyone’s always cheerful and nothing bad ever happens. Plenty of bad things happen. People get injured, sometimes fatally, and I’ve shed more than a few tears over a couple of scenes as I was reading my way through all the books. Poverty and crime exists, and the kingdom’s borders are often under attack by bandits and, through most of the series, religious zealots. But as far as fantasy worlds go, Valdemar seems like the opposite of the crapsack fantasy world that gets created by many authors. Law and justice are carried out by Heralds, who have their Companions to keep them on the proper side of fairness. They’re not perfect by any stretch of the imagination, and they make mistakes, but Heralds are, by and large, good and trustworthy people who are responsible for the wellbeing of the kingdom. The ruling monarch must also be Chosen as a Herald in order to take the throne, ensuring that even if their rule isn’t flawless, they’re at least incorruptible. Disagree with a legal ruling that your crooked village headman gave? Just wait until a Herald riding circuit comes by and dispute the ruling with them, in order to get an impartial judgment.

Then there’s the hope that the books embody. That’s largely what the books mean to me. Aside from just being entertaining stories set in an interesting fantasy world, it’s hard for me to read them and not feel hopeful about things in my own life, like the hope of the book’s central themes spills over into the real world. And no small part of that comes from the idea that anyone can be Chosen to be a Herald.

Or more specifically, Heralds aren’t just Chosen from the rich and privileged. You could be the 8th child of a poor farming family and there’s still a chance that someday, that magical white horse will ride up to you and Choose you and you’ll be whisked away to a better life, a life in which you get to learn so many things, in which what you do can make a difference to so many, and you know that no matter what, you were Chosen for this life for a reason, that you life has a purpose and meaning to it and that there’s something you can do that nobody else can do. And through it all you’ll have a constant companion, your Companion, who will keep you steady and be your ally and friend and mentor and will be by your side through thick and thin, through any kind of danger.

But why would that give me hope? I know I’m not Herald material. Not by a long shot. But there are Healers and Bards, and if you’ve got the skill to be one of them, they’re not going to turn you away because you can’t pay tuition or some other ridiculous thing. Bards spend their lives composing and playing music and traveling to spread word of news and to bring back news picked up along their journeys. Healers, well, heal, both by a quasi-magical Healing Gift and also by herbs, surgery, general fantasy-style medicine. Their services are paid for by taxes, their respective Collegia train them up properly, and their work is as respected as that of Heralds, and they live good lives for it too.

In the world of Valdemar, simply being myself, being true to my own talents, would actually get me respect, lead me down a road that could actually be considered a calling. I wouldn’t necessarily be held back by lack of finances, mistakes made in the past, not spending time making the right connections in life, not living in the right places. Transplant myself into Valdemar, make my way to Haven, and just being myself would give me a chance to really make something of myself, bring out my talents and polish them up and learn so many things that in reality, I don’t have the chance to learn.

Sure, not everyone in that world with those talents would get discovered, to be certain. But again, it comes down to hope, and the knowledge that it could happen. When I read those books, when I see characters go from nobodies to somebodies, from unknowns to people who live their lives for a purpose and who are appreciated even by the reigning monarch, it feels like I’m burying myself in the hope for improvement.

When someone has felt alone and frightened for most of their life, reading about someone discovering a partner who’ll never leave them is like soothing the pain of an old wound. When someone has gone for years having their talents belittled and ignored, falling into a world in which people would celebrate those talents makes some of the weight a bit easier to carry. The series is like a light in the darkness for me, getting to sink into the story and imagine, just for a little while, that I’m the person I’m reading about, whose life may have a buttload of responsibilities but who are also now living up to the potential they were born with or that they developed over the years.

Religion in that world? Officially polytheistic, with the proviso that there is no one true way. The monarch and their deities of choice do not hold any greater sway over politics and religion than anyone else’s in the kingdom, and I can really get behind that. It’s been established that there are 2 actual deities who intervene in mortal affairs now and again, one male and one female, and the myriad gods worshipped across the land are facets of them, or conceptual ideals, and that’s just fine and dandy and nobody can force you to bow down to a deity you don’t actually worship. Given that I spent a good chunk of my life trying to pin down my own beliefs on faith and religion, trying to be a good person and believe in what others wanted me to believe, this is another concept that brings me some comfort. My way is right for me, your way is right for you, and that’s the end of it.

The books may not be the best things ever written, but they’re more than good enough to let me leave my own problems behind and to find solutions in the lives of fictional others. You may hear me talk about how I disliked a certain book of the series, but I can’t foresee the day that I’ll put these books aside for the last time and declare that the world no longer holds an interest to me. They’ve been with me through hard times in my life, they’ve been my comfort when stuff really sucks and I need an escape from reality, and even when I cry at the ending of Magic’s Price or Exile’s Valor, I’m still happier for getting to spend some time in my favourite fictional world. Some people have Narnia. Some have Middle Earth. Me, I’ve got Valdemar.

It always welcomes me home.

8 comments on “Why I will forever love the Valdemar novels.”