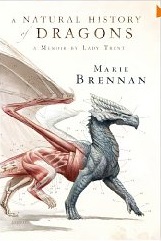 Summary: (Taken from GoodReads) All the world, from Scirland to the farthest reaches of Eriga, know Isabella, Lady Trent, to be the world’s preeminent dragon naturalist. She is the remarkable woman who brought the study of dragons out of the misty shadows of myth and misunderstanding into the clear light of modern science. But before she became the illustrious figure we know today, there was a bookish young woman whose passion for learning, natural history, and, yes, dragons defied the stifling conventions of her day.

Here at last, in her own words, is the true story of a pioneering spirit who risked her reputation, her prospects, and her fragile flesh and bone to satisfy her scientific curiosity; of how she sought true love and happiness despite her lamentable eccentricities; and of her thrilling expedition to the perilous mountains of Vystrana, where she made the first of many historic discoveries that would change the world forever.

Thoughts: This book is told as the fictional memoir of Isabella Trent, starting from her well-to-do childhood and her initial preoccupation with the common dragons around her home, through adulthood when she decided to throw societal convention to the wind and go off to study dragons on her own instead of staying at home like a proper lady. It was a conventional telling of an unconventional woman’s story, and it allowed for numerous observations not just on the events of her life but also for commentary on culture, gender roles, and general witticisms.

Lady Trent is not content with traditional gender roles and would much rather be a scientist, off in the wild studying dragons. Thanks to an indulgent father and an amused and somewhat befuddled eventual husband (Jacob), this dream becomes a reality, and undertakes a journey into the wilds to study dragons in their natural habitats. Much to the bemusement of many other members of the team.

Avoiding too much commentary on the names of the main couple of the story (Isabella and Jacob – sounds rather Twilight-inspired), the characters themselves were wonderful to read about. Isabella’s self-assured and independent attitude as a counterpoint to society’s restrictions against women were witty, poignant, and her headstrong nature made her a lot of fun. Jacob was more relaxed, permissive of his wife’s “eccentricities,” encouraging her scientific curiosities as he himself shares them. They make an interesting couple, driven and affectionate. They’re not without their troubles, but that just makes them more realistic. The romance between them was actually downplayed, their love coming across more between the lines than through displays of passion, and at times it was hard to see if she cared for him in the same way he cared for her, or whether he was just a means to an end. The subtleties in the writing and the interactions between them made for a stronger relationship, I think.

The scientific explorations of the book are aided along by the artwork of some of the dragons that Lady Trent and the team encounter on their travels, which, along with the beautiful cover art, are meant to convey the sketches that she talks about making, and some of the notes of draconic biology. Rarely do I bother commenting on the artwork associated with any given novel, but here, it’s worth the mention. The art is clean, attractive, and is entirely appropriate for the very plot of the novel itself.

Ultimately, this is a very creative experiment in incorporating traditional fantasy elements with a more modern period setting (Victorian/Edwardian instead of the classic medieval period), with a bonus in the interesting narrative presentation. Brennan’s writing is polished, her pacing slow but smooth, and her ideas sharp and intelligent. If you’re looking for a fantasy novel that really stands out from others, then give this one a try. Bring an open and keen mind, and soon you’ll be wanting to head out into the forests and mountains and seek out dragons of your own. (Just try to wait until you’ve read the upcoming sequel next spring, The Tropic of Serpents, so you’ll be up to date with all the latest scientific discoveries!)

11 comments on “A Natural History of Dragons, by Marie Brennan”