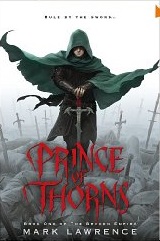 Summary: (Taken from GoodReads) When he was nine, he watched as his mother and brother were killed before him. At thirteen, he led a band of bloodthirsty thugs. By fifteen, he intends to be king…

It’s time for Prince Honorous Jorg Ancrath to return to the castle he turned his back on, to take what’s rightfully his. Since the day he hung pinned on the thorns of a briar patch and watched Count Renar’s men slaughter his mother and young brother, Jorg has been driven to vent his rage. Life and death are no more than a game to him–and he has nothing left to lose. But treachery awaits him in his father’s castle. Treachery and dark magic. No matter how fierce his will, can one young man conquer enemies with power beyond his imagining?

Thoughts: It’s difficult to describe this book properly. Dark fantasy, check. Rogue prince trying to claim what he believes is his rightful place, check. Brutality, rape, and pillaging, check. This isn’t the most comfortable of books to read, and it isn’t meant to be. It’s meant to tell the story of a Prince Jorg, leading a horde of bandits and miscreants, making a name for themselves and more importantly, taking those incremental steps to get Jorg where he wants to be.

Or so it seems on the surface. For all that the plot of the novel seems fairly standard, a classic fantasy tale (albeit from a vastly different perspective than we normally get), there are enough twists and turns to keep a reader interested even when things get a little slow. There are many layers to this novel, and nothing is quite what it seems. Indeed, where it first comes off as fantasy, or a sort of alternate history heavy with fantasy themes, it is, in fact, post-apocalyptic, and post-apoc fantasy is rarely done. It’s compelling to see things unfold as the story goes on, little pieces of the world and history and characters unfolding, little by little. Everything falls into place at the end and you ca’t help but sit back and go, “Whoa,” when it all comes together.

Part of the darkness of the story is what makes it so difficult to read sometimes. Some part of me instantly recoils from characters talking of raping women, and with good cause, but I can’t deny that for the characters in question, the talk and the acts were frighteningly in character. Lawrence doesn’t shy away from betraying sheer disgusting cruelty in his debut novel, and Jorg, young sociopath that he is, ends up being one of those characters you love and hate at the same time. Biting wit, incredible insight, and a little shit you want to smack upside the head more often than not.

The way the story’s told takes a little getting used to, jumping back and forward from present to past, so that the events leading up to Jorg’s current situation get slowly revealed over time. It was effective, and allowed Lawrence to tell a complete story without bogging the reader down in short and heavy backstory, or making the whole thing linear. Both of those options sound considerably less appealing than the way it was actually done, so I applaud the choice.

This isn’t the book to read if you like your fantasy brainless and fluffy. This isn’t even the book you want to read if you want something familiar and comfortable, unless your ideas of familiar and comfortable involve stark gritty reality with no soft edges in sight. It’s the kind of book you read when you want something new, something rich and meaty, something a little disturbing, a little psychopathic, where there’s an antihero instead of a hero, someone you can root for while still disliking. It’s an odd mix, but it works, and I, for one, am eager to read the rest of the books in the series to see what Jorg does next.

6 comments on “Prince of Thorns, by Mark Lawrence”