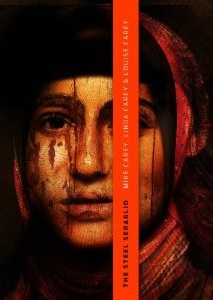 Summary: (Taken from GoodReads) The sultan Bokhari Al-Bokhari of Bessa has 365 concubines – until a violent coup puts the city in the hands of the religious zealot Hakkim Mehdad. Hakkim has no use for the pleasures of the flesh: he condemns the women first to exile – and then to death Cast into the desert, the concubines must rely on themselves and each other to escape from the new sultan’s fanatical pursuit. But their goals go beyond mere survival: with the aid of the champions who emerge from among them, they intend to topple the usurper and retake Bessa from the repressive power that now controls it. The assassin, Zuleika, whose hands are weapons. The seer, Rem, whose tears are ink. The wise Gursoon, who was the dead sultan’s canniest advisor. The camel-thief, Anwar Das, who offers his lying tongue to the concubines’ cause. Together, they must forge the women of the harem into an army, a seraglio of steel, and use it to conquer a city. But even if they succeed, their troubles will just be beginning – because their most dangerous enemy is within their own number…

Thoughts: Sometimes it happens that you read a book and wonder why you allowed so much time to pass before reading it. You also wonder why you haven’t heard more about the book from other sources. This is one such book.

The Steel Seraglio is told as a series of stories, plot circles within plot circles. We start out with a man looking for Bessa, the fabled city of women. As it becomes clear that the story is being told by an archivist from the city itself, the story then jumps back to the days before the city became what it now is, back to the days of Bokhari al-Bokhari and his harem and the city’s takeover. The story revolves around the women of the sultan’s harem, and while following their ordeals after being cast out of the city and their subsequent attempt to turn their lives around and retake it, we jump back yet another step and see everyone tell stories or their own early lives, telling how they became who they now are. Circles within circles, and while this presentation could have been horribly chaotic, it actually worked quite well. It highlights the sense that the stories being told are part of an epic far-reaching adventure, comprised of many separate parts that have come together as a cohesive whole.

It also made the story appealingly episodic. Again, something that could easily have not worked well or been a detriment to the story, but instead it was all crafted so well that it was a mark in its favour rather than against it. Like reading a collection of short stories that all properly tie in together and work together to give you a sense of the overarching tale, good as stand-alones but even better when put together.

The characters in The Steel Seraglio are at once diverse, interesting, and admittedly, somewhat stereotyped. There’s the hedonistic sultan with his expansive harem. There’s the ascetic religious zealot. The last surviving prince after a large-scale slaughter. The beautiful assassin. The demure librarian. The charming thief. The strength of the written characters lies more in the way they come together and support each other, the expression of people coming together as a community, I think. While they do have depth and history as individuals, they are, by and large, expressions of archetypes. This may be the book’s biggest failing when it comes to its style and the way it shows stories within stories. When you do wrap your story in so many layers, somebody telling the story of a history involving people telling stories, characters can easily devolve into those archetypes, clearly becoming characters instead of people.

Still, the stories being told are interesting enough to keep my attention in spite of the characterization drawbacks. From Hakkim Mehdad’s sacking of Bessa to the women taking it back, to defending it from the lost prince returning to claim what he thinks is rightfully his, the book moves at a quick pace, the writing style engaging and entertaining, and it very quickly becomes a page-turner that you don’t want to put down.

And that’s what surprised me when I realized that in spite of being good, in spite of receiving generally high ratings amongst those who had read it, it didn’t seem to have garnered much in the way of publicity. Which is a shame, because it’s well worth reading.

The illustrations, appearing every few chapters or so and most often featuring the character that the book has recently paid a lot of attention to, are beautiful and deserving of mention in this review. Normally illustrations in books don’t affect me one way or the other, unless they’re something truly outstanding, and believe me, they are. Nimit Malavia‘s work is wonderful, and I highly encourage people to check out his art if you haven’t already done so.

From beginning to end this book entranced me, and it was over far too soon. If this is the first time you’ve heard of it, you’re missing out; it’s well worth reading. It’s a hard book to categorize (not quite fantasy, not quite historical fantasy, but definitely speculative fiction), but its appeal is definitely there and it could probably be enjoyed by a wide audience. Read it all in one go, or use its episodic storytelling to make it last as you read it in between other books, but do read it.

2 comments on “The Steel Seraglio, by Mike, Linda, and Louise Carey”