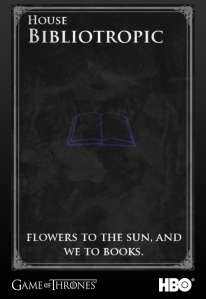 As I read more of A Game of Thrones, I’m still feeling exactly what I did when I first started. That is, this is exactly the kind of epic fantasy that I’ve been craving for so long, searching for but being mostly unable to find. As each chapter goes by and I find myself drawn into the plot and interested in the characters, I’m more and more glad that  decided to take the plunge and join this readalong book club thing so that I had a good excuse to start reading books that it seemed everyone and their mothers already knew the plot of.

As part of the book club, every 2 weeks we read about 14 chapters and ask each other questions regarding what we just read. Here’s this week’s batch of very interesting ponderings.

Jamie: Littlefinger and Varys banter really well with one another; I love their back and forth as they try to outdo one another. Who do you prefer and why?

This is a tough question. I think I’d have an easier time deciding who I didn’t like more and why. Neither of them particularly appeal to me, and for different reasons. Littlefinger’s got the smooth banter thing down very well, but his arrogance and know-it-all attitude really turn me away from liking him as a character. I don’t doubt that he’s going to be interesting, but as for first impressions, mine’s not a very positive one.

And Varys… Well, he seems more like a caricature than a character, and I suspect some of that is feigned, giving people exactly what they expect to see so that they underestimte him, but ugh, he’s painful to read. The very image of a weak effeminate fop, stereotyped and unpleasant. And I don’t know enough of the character yet to know if that characerization was more of an author failing, thinking that was how a eunuch would act, or whether there’s some deeper and less cliched purpose behind it. I hope for the latter, but not knowing enough yet,  can’t really say.

Heather: Arya and Sansa are clearly very different personalities with very different views on the world, despite coming from the same origins. Which do you identify with the most? Do you think the chasm building between them is becoming too great to be bridged, despite their father’s efforts to keep them closer?

Good question, and a complicated one to answer. I love reading about Arya, and she’s got that kind of strength that I only wish I’d had when I was younger, and indeed wish that I could have now. She’s my clear favourite when it comes to picking which of them I’d prefer to read about.

However, I can relate to Sansa far more than I thought I would be able to when we first saw her on the pages. I can relate to her desire to be a good girl, to do what she’s told and fit into the life people have made for her and please those around her who matter to her. She’s more than a little on the shallow side, but she’s also young, and I can foresee enjoying more of her perspective as the books go on.

I don’t think the gap between the two sisters is too wide to bridge. I think that, if they’re willing to make the effort to reach each other, they’ll be able to, and be all the stronger for it.  They’re both young, willful in their own ways, but I don’t think that’s insurmountable. 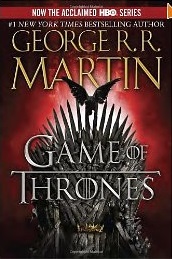 Allison: Ned Stark seems to be a pretty honourable guy so far–he obviously cares about his family and duty is important to him. I liked the part where he gives Arya back Needle and arranges for her to have lessons. However, I can’t bring myself to like him, because I have this foreboding feeling that he is going to do something terrible and make me hate him. What do you think of Ned so far?

So far, I like him. I like his exasperation with politics, I like the fact that he seems to be a fairly honest down-to-earth man who knows his duty and is more than content to carry it out. Sometimes to a fault, I admit, and he’s thus far made a decision or two that have been based on politics and duty that have made me annoyed.

But overall, I like him. And if something does happen where he has an about turn and ends up being a jerkass for a time, or for all time, I like the way he thinks enough that it will be interesting to see it happen to him. If something like that was to happen, I imagine that’s how he’d be seen from the outside, and he himself would be unhappy at having to do something so awful.

All hypotheticals, of course. If he does pull a 180 like that and the rest of you know about it because you’ve watched the show, I bet you’re all chuckling at me right now!

Ria: What do you think of the situation involving how Jon turned enemies into allies on the Wall? Effective strategy, or overused Saturday-morning-cartoon plot device?

I have very strong feelings about this situation, and I could probably write a whole post based on it, but I’ll try to keep things relatively concise here.

Turning enemies into friends by helping them overcome their own weaknesses, holding out a friendly hand to them, can work, even if it’s cheesy as hell. But it all depends on the reason they were enemies in the first place. Some of his adversaries didn’t get enough character development at first for me to see whether they actually were lonely and scared and unsure and beaten down by Ser Thorne and really just needed a helping hand, or whether some of them were just natural jerkasses. (One of them I suspect is more the latter than the former…) So it can work, but there are a lot of “what if”s in that scenario that rarely get explored when writing about it.

But what really bothers me about that situation is how Jon was forced into it in the first place. In his dressing down about how he was acting the bully in the training yard, fighting properly against those who didn’t know how to fight properly, I won’t pretend that I didn’t get angry. Jon was essentially being blamed for being too good, and the reaction of his superiors was basically to tell him to stop it. It wasn’t Jon’s fault that he was pitted against those who had no skill. Yes, he was thoughtless for not considering it, but it’s the job of a supervisor/overseer/commander to spot these things and give everyone a chance to train. If Jon’s too good for the newbies, then get him to train with someone who has more experience. Instead, he was accused of bullying. Life on the Wall isn’t supposed to be fair, perhaps, but it doesn’t take a genius to understand that such a situation is a bad one for all around, and it’s not the job or a raw recruit to point this out to his superiors.

So with that in mind, the whole situation felt like an enforced guilt trip, a morality lesson that didn’t hold much water. Jon was doing what he was told, and then was blamed for doing it too well. And then forced into the position of having to essentially do someone else’s job, training the others. I didn’t like that scene at all. It was powerful. It was emotional. And it tripped all the wrong triggers with me.

Read what the others in the book club are saying! Jamie | Heather | Allison