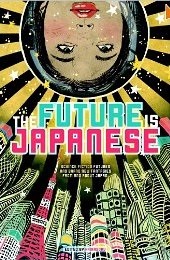 Summary: (Taken from GoodReads) A web browser that threatens to conquer the world. The longest, loneliest railroad on Earth. A North Korean nuke hitting Tokyo, a hollow asteroid full of automated rice paddies, and a specialist in breaking up “virtual” marriages. And yes, giant robots. These thirteen stories from and about the Land of the Rising Sun run the gamut from fantasy to cyberpunk, and will leave you knowing that the future is Japanese!

Thoughts: Anthologies are hard to rate and review. With the writing styles of so many different contributing authors, you can get some very varied results, and a few bad apples can spoil the bunch.

I don’t mean to say that this collection contained bad apples. But as with many such books, some stories were better than others, and some seemed to just drag on and didn’t seem to have much purpose or direction. The ones that were good were good, exploring various sci-fi concepts from a Japanese perspective, with a Japanese setting, or involving Japanese characters. Some, however, seemed to have little in common with the main theme, and it seemed that their inclusion hinged solely on having a single character with a Japanese name, or were written by a Japanese author. Which isn’t necessarily a bad thing that should have disqualified those stories from being included (For example, The Indifference Engine by Project Itoh was a superb offering), but they weren’t quite what I was expecting. I was hoping for more stories with a focus on Japanese culture and experience. And that may be my own problem, going into this with incorrect expectations, but it did colour my overall opinion of what I read.

There were a few stories in here that also felt flat, distant from the narrative, and I don’t know if that was the author’s intent or perhaps an issue that occured due to translation from one language to another, as some of the contributing authors originally had their works published in Japanese. I hesitate to make that kind of judgment call, since I can’t say for certain whether the problem was in the writing, the translating, or in it just not being my cup of tea. But it was due to these issues that I feel I can’t rate the book higher. It’s a shame; I feel like I’m dragging down the appeal of the stories that I really enjoyed.

For me, this was definitely a “take it or leave it” kind of book. While I am glad that I got the chance to read some of the short stories it contained, and found myself introduced to some new authors whose work I definitely want to seek more of, in the end I can’t say that I would go back and read the whole collection again. I found myself disappointed too often for me to want to do that.

One comment on “The Future is Japanese, by various authors”