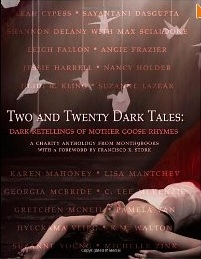 Summary: (Taken from GoodReads) In this anthology, 20 authors explore the dark and hidden meanings behind some of the most beloved Mother Goose nursery rhymes through short story retellings. The dark twists on classic tales range from exploring whether Jack truly fell or if Jill pushed him instead to why Humpty Dumpty, fragile and alone, sat atop so high of a wall. The authors include Nina Berry, Sarwat Chadda, Leigh Fallon, Gretchen McNeil, and Suzanne Young.

Thoughts: It isn’t hard to find collections of stories that apply a dark twist to fairy tales. It’s a bit harder to find something that applies a dark twist to nursery rhymes, those little snippets of poetry and song that most of us grew up with and know like we know the backs of our hands. But th stories in this collection are ones that are familiar and unfamiliar at the same time, the telling of the darker side of those rhymes that we don’t put much thought into. Little Miss Muffet and Humpty Dumpty have new and creepy life breathed into them by this collection of YA authors.

Some stories worked better than others. “Blue,” for example, which was based on Little Boy Blue, didn’t actually stick much to the original rhyme (I don’t recall any sheep in the meadow nor cows in the corn), and reminded me of nothing so much as bad fanfiction for Fatal Frame 3. “Life in a Shoe,” based on the old woman who lived in a shoe, was depressing and difficult to read as it tells the story of a family with far too many children to be fed and cared for properly because the man of the house is a borderline rapist. Dark, yes, and in both cases, but the stories seemed like they got into this collection only due to a stated connection to the nursery rhymes, though in reality the connection was thin and tenuous at best.

On the other hand, this book contained some true gems, making me wish more than once that they were longer than they were so that I could keep reading them. “Sing a Song of Sixpence” was one of my absolute favourites, incorporating all elements of the nursery rhyme into one dark fantasy story that was truly inspired. “Wee Willie Winkie” was very creepy and deft in its handling of the truth behind small-town legends. And “I Come Bearing Souls” was an amazing twist on “Hey Diddle Diddle,” of all rhymes, featuring reincarnation and literal interpretations of Egyptian mythology and the concept of the self and relation to duty and fate. “Tick Tock” was a creapy story about a group of children committing murder for reasons which were left obscure, adding a rather disturbing supernatural element to the tale. Some things are better off when they still have some mystery to them, after all.

My biggest regret, though, is that the ARC copy I received was missing the second part of a really good story. “The Lion and the Unicor,” dealing with historical witchcraft in England and King James’s connection to the devil, was broken into two parts. The first part appeared early on, and about a page into the tale I was hooked, really excited to keep reading and to find out what happened. Unfortunately for me, the ARC copy doesn’t actually have the second part in it, which was very disappointing. I won’t hold that against the book, since I know the risk with ARCs is that one gets them unfinished and often changes will occur between the ARC and the final product, so the book isn’t losing marks with me because of that unfinished story, but I will say that I was disappointed to not find out how such a wonderful story was going to end.

Over all, there were more hits than misses in this compilation, and I would say that fans of dark YA fiction would do well to take a look at this one. Though I admit I hadn’t heard of most of the authors, I was introduced to a few whose work I now want to take a close look at. Definitely a book worth keeping on the shelves.