The fun part about Halloween (aside from the candy, that is), is thinking about all the things that scare us. And celebrating them. Even though we may be frightened of ghosts, aliens, children dressed up as ladybugs, this is still the time of year to curl up with your fears and enjoy them. Have a little fun with them. Horror movies, scary novels, sitting around the campfire with s’mores and a flashlight held under your chin, then whole shebang.

It’s always interested me to figure out where our fears come from. Some of my own I can trace back to childhood events, little things that most people would shrug off and get over without a second thought, but that have stuck with me for whatever reason.

So to celebrate my fears this Halloween, I’m going to take a look at the things I used to be afraid of when I was a child. Be warned: there is craziness ahead. (Though not as crazy as some, since I’m good friends with a person who freely admits that Gumby, of all things, used to terrify him.)

Now, there’s nothing scary about the poster itself. I wasn’t afraid of the character or the setting. No, what scared me was what this poster looked like when I went to bed at night. There were some crinkles in the poster, probably from times I or my parents had decided it would look better on another wall or in a different position. And because I was young enough at the time to need to sleep with my door open (rather than get a nightlight, my parents just kept my door open a crack so it wasn’t totally dark in my room), the light from the door would shine on the poster in such a way as to create the image of a distorted grinning skull. Looking at me. As I tried to sleep.

But because I loved the Ninja Turtles so much, I didn’t want to take the poster down. I suffered through that maniacal skull for weeks before getting up the courage to move the poster for myself, to a place where the light wouldn’t create that image anymore.

Still afraid? Hardly. I mean, maybe if I saw the same image again today, I might get a shiver, just because of the associations. But while it scared me at the time, it wasn’t something that left a lasting effect on me. 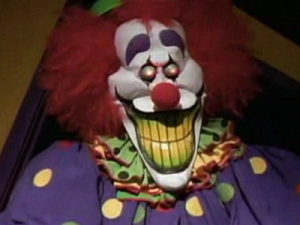 I blame, of all things, an episode of the Canadian children’s show, Are You Afraid of the Dark, for giving me this fear. One of the first episodes I ever saw was one involving Zeebo the Clown, the charming character in that image there, whose nose is stolen by a kid as a prank. And naturally, the clown is possessed by the ghost of a dead murderer (or something like that), so he starts coming after the kid to get back what’s his. It was a creepy episode, and it started my fear of clowns.

Let’s face it, wouldn’t you also be afraid if you saw that face coming toward you in the night?

Still afraid? To a degree, yes, clowns still creep me out. I can tolerate it, though. I don’t run screaming away from circuses or parades. But present me with a movie involving a killer clown, and I will refuse to watch it because the creep factor is far higher for me than, say, a killer swarm of spiders. 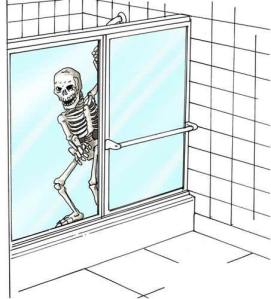 Fear 3 – Skeletons in the shower.

I can’t believe I actually found an image for that…

Okay, this one requires a bit of set-up to understand. I’ve lived in apartments all my life. My childhood was spent in a moderately-sized apartment building, with neighbours above and below. So sometimes I would hear sounds from their apartments, muffled and faint, but still discernible through the walls.

So one day, I just sort of had this realization that holy crap, I can hear a shower running. And my parents are both in the living room. And there’s nobody else here but us. Someone’s using the shower and it’s not one of us! And rather than my brain leaping to the understanding that I’m likely just hearing the upstairs neighbour using his shower, it instead leapt to the image of a creepy skeleton taking a shower, one that was normally out of phase with this reality but had somehow leaked through. And that if I went into the bathroom to check, it would poke its head from around the shower curtain and look at me and grin and believe me, that was enough to keep me from going into the bathroom when I heard a neighbour’s shower going. For years!

Still afraid? Nope. I got over that one. Eventually. But I’m serious when I say that I had that thought for years. And even the image that came to mind still creeps me out to this day, but it doesn’t stop me from doing anything. Now my biggest fear when a neighbour is taking a shower is that if I take one too, the hot water will run out. 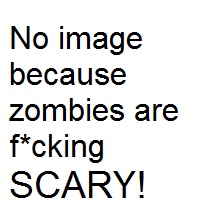 Again, this fear can actually be traced back to Are You Afraid of the Dark. Who’d have thought that one kid’s show could instill so many fears in a person?

The episode that scared me involved treasure on a sunken ship, and a guy who had stolen some. And the rotting corpses of the people who had drowned on the ship didn’t like having their shinies stolen, and so were out to get back at the guy who took stuff. Every time he slept, they would crawl out of the water, dripping and slimy and rotted, and start making their way toward wherever this guy was. The man (rather than move to the prairies or just return all the treasure) had spent the majority of his life sleeping in increments of less than 5 minutes, just enough time for the dead to reach his door before they would have to retreat to the sea because he was awake.

And hot damn, that was terrifying! And it started my lifelong fear of zombies. A fear that, over time, has actually risen to phobia levels.

I still have nightmares about zombies. I dream that the city’s been overrun by them and I’m trying to escape, and I eventually find some safety but it turns out to only be temporary, and I have no weapons and can’t fight them or reason with them or run any more, and I’m going to die. Eventually, I started dreaming in a failsafe for this situation, which involved me tapping the back of my wrist twice to activate some sort of save point, and it gave me a little bit of comfort because I knew then that I couldn’t really die, and that I could stop any time I wanted. But ultimaely  was still caught in that situation, unable to get away from it.

I spent nights of insomnia, sitting in the living room and staring out of the window until dawn, knowing that my apartment wasn’t defensible, and that even though zombies are not real, if I’m wrong and they are and they start coming down the street, it’ll only be the fact that I’m watching for them that will maybe give me time to escape.

Hey, I’m not saying it’s sane. But that is the level of terror that zombies instill in me. It’s ridiculous. It’s absurd. It makes people worry for my mental health.

But that’s fear for you.

Still afraid? What do you think?

I’m not as bad as I used to be. While in therapy for anxiety, I talked to my psychiatrist about this stuff, and I’vemade progress in overcoming he fear and not having it grip my life so much. I no longer have bouts of insomnia because of that fear. I can watch zombie movies sometimes, with friends, under the right circumstances, as a sort of desensitization therapy. I’m coping, but yes, when you get right down to it, I’m and still insanely afraid of zombies.

…Think I can get some sort of compensation from the makers of that TV show for all this?

So tell me, friends, readers, fellow -phobes, what is it that makes your palms start to sweat and your heart start to race, that kicks in your fight-or-flight instincts? What did you fear when you were children, and are you still afraid of it now?

2 comments on “What would you give for your kid fears?”