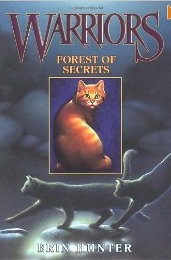 Summary: (Taken from GoodReads) In this third gripping book of the feline adventure series, Fireheart is determined to uncover the truth about Redtail’s death–but he is unprepared to face ThunderClans darkest secrets.

Thoughts: If you’ve read the first two books of the series, you know already that while this is literature for children, it isn’t always fluffy and nice. It involves pain, loss, sometimes death. That’s not too surprising when your setting involves clans of feral cats who don’t shy away from fighting each other.

However, this is the book that really pushes the series into serious “What Do You Mean It’s For Kids” territory. Aside from the usual fight scenes and blood that usually accompanies the books, there are two main incidents in this one that tend to make people a bit uncomfortable. The first is Silverstream dying as she gives birth, complete with descriptions of how she’s yowling and contorting in agony, and bleeding all over the place. The second is the death of Brokentail, a very emotional moment in which a mother kills her murdering tyrant of a son. Yes, these books are for kids. How these books go unchallenged in libraries when people are still trying to ban Mark Twain’s use of racially inappropriate words is anyone’s guess.

But while that may be disturbing, I can’t help but admire the author for essentially saying that kids are able to handle these things. I like books that don’t talk down to children and treat hem as though they can only handle sanitized fluff in their entertainment. Life is gritty, hard, and dark, and Hunter doesn’t flinch away from throwing those elements into the already harsh world of the Clan cats.

Many of my comments about these books will remain the same as the series progresses. The use of questioning repetition, especially to end chapters, is still present. Fireheart is still constantly second-guessing himself while still being generally sure of how things are. And there’s always more to what’s going on than it appears at first glance. These things remain pretty much constant, and whether you find them annoying or endearing, there’s still no denying that a good story — albeit a rather disturbing one at times — is being told here.

One comment on “Warriors Wednesday: Forest of Secrets, by Erin Hunter”