Yes, it’s the return of Nostalgia Friday! I started doing this last year, and didn’t so much lose steam as get distracted by a hundred and one other things. So I’m reviving it. For those who missed the original goal of Nostalgia Friday, I’m going to try to post each Friday with a book that I read first years ago and have recently reread, to see how well the book stacks up against my memories of it. In some cases it ends up being more enjoyable, and in others, less so. But no matter which way my opinions go, it’s kind of fun to look back on the books I used to read and see just how much my reading tastes have changed or stayed the same.

And so, on with the show! 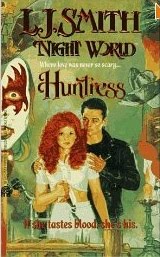 Summary: (Taken from GoodReads) Jez Redfern is unique. She’s a vampire hunter…who’s half vampire. Raised in the Redfern family, the girl with fiery hair and silvery-blue eyes was the undisputed leader of a gang of vampire raiders. Then came the discovery that shattered her life – her mother was a human. Now, Jez hunts her former friends, protecting humans from the Night World.

But when Circle Daybreak sends her on a search for one of the legendary Wild Powers, Jez has to rejoin her old gang. They want her back — especially Morgead, the gorgeous green-eyed vampire who used to be her second-in-command. Jez wants to stay faithful to Hugh Davis, the human she loves. But Morgead swears he’s her soulmate and he’ll do anything to lure her back to the old ways. With danger and temptation around, Jez finds herself irresistibly drawn to him. And she’s afraid that if she tastes blood again, she’ll become the evil huntress she once was…

Thoughts: My rather lackluster opinions of the Night World books isn’t dramatically improved by this book, but I did enjoy it more than I expected I would, and even more than I remembered doing when I first read it all those years ago.

Part of my improved opinion of this book is due to the fact that in this, there are demonstrated consequences to a teenager living a secret double life as a vampire hunter. Not many consequences, I’ll grant you, as Jez’s family don’t seem to understand the meaning of the word “discipline”, but some, and that was a favourable comparison to other books in the series.

Comparing to books these days, however, it’s nothing. More authors are actually giving the time needed to put reality into their fantasy and urban fantasy, and making a point of showing that when a high school kid skips class and stays out all night and doesn’t give their parents and teachers a damn good reason why, they get in massive amounts of trouble. Really, even Buffy the Vampire Slayer showed this, and that show was on TV at the same time that the Night World books were being written.

This is the beginning of what the previous books in the series were really building up to. The start of the prophecies being fulfilled, the countdown to the millennium, and the truth behind all the hints about the changes in the Night World that have been taking place.

Prophecies are old hat and have been done to death. More annoying is the fact that one of the twists on the prophecy’s interpretation relies on the assumption that the word for sight and prophecy were just as interchangeable in English (“vision”) as they were in whatever language the prophecy was originally written in. This sort of assumption that the reader will either overlook these things or not notice them seems to be very common in Smith’s books, and is one thing that particularly annoys me.

But still, Huntress was a decent book, as far as the Night World series goes, and was an interesting way to kick off the more action-filled part of the series. Jez’s story is an interesting one, as is her struggle to fit into two worlds while not really feeling like she belongs to either. Also interesting was the way that Jez and Morgead, the established soulmates of the tale, were resistant to their bond at first. Jex had her heart set on someone else and experienced an internal struggle over the issue, though admittedly not much of one. Still, much like one of the earlier novels in the series, it was interesting to see a connection between two people who didn’t want to be connected, showing that the soulmate principle isn’t an instant recipe for “happily ever after.”