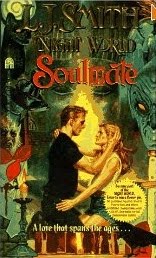 Summary: (Taken from GoodReads) Hannah Snow’s life was perfect…until the notes started appearing. Notes in her own handwriting, warning her: Dead before Seventeen. Then she starts having visions of another time, another life. And of a stranger who tore her world apart.

Now the stranger, Thierry, Lord of the Night World, is back. Convinced Hannah is his soulmate, he has searched for her throughout the years, waiting for her to be reborn. But if Hannah’s destiny is death, can even Thierry’s love protect her?

Thoughts: This used to be my favourite book in the Night World series, tied for first with Spellbinder. I loved the way that reincarnation was approached, the idea that love could follow people through lifetimes, always calling back to each other and finding each other once again, even when both parties could well be vastly different than their previous incarnation.

Reading this book again now, I’m sad to say, ruined the story for me. It was very hard to keep the shine of happy nostalgia going when I found so many flaws.

As stories go, it was something of a creative one, and I can’t fault Smith for that because the idea and ideals fits so very well with the established mythos of the Night World. The reader also gets to see, in a very close-and-personal way, the fabled first vampire Maya, whom we’ve really only heard about in passing back in Spellbinder, when Thea told the legend of Maya and Hellewise. Maya herself was quite an interesting character, carried through the ages by a singular obsession, one that went so deep and was so engrained in her mind that she herself really couldn’t attach any logic to it. “I have to win,” is all that mattered to her, even when it was clear that she didn’t entirely know what her own idea of winning would even mean. It was interesting to see her be so flawed and unhinged and yet so very calm about it all.

However, the biggest problem I had with this book was exactly what I used to love about it: reincarnation. Not so much the concept, but the way it was carried out. Hannah’s first incarnation was Hana, a Stone Age girl living in some place that I’m fairly sure is geographically and anthropologically impossible. She lives in a place where there are Arctic foxes and wild cattle, part of a tribe consisting of people with quite varied hair and skin tones (though it’s established that they’re all at least Caucasian), they worship Hekate as a dark goddess who also seems crossed with a mother goddess figure, and the tribe is run by a matriarch. Her best friend is somebody who “always has to wear something new to every festival” and is fretting because a man she doesn’t quite like wants to “mate [her]”. Sorry, honey, but when you’re in that era and 16, you’re approaching the end of the average lifespan, and you’ve probably popped out a couple of kids already. You’re not a modern teenage girl in a furry bikini.

This all wouldn’t have been quite so painful (the books all deal with hidden aspects of the world we live in everyday, so I might possibly have been able to suspend my disbelief for a while) if the psychiatrist character who was helping Hannah uncover her past didn’t state quite bluntly that the majority of past-life regressions were always told in ways that made it quite clear that the people who romanticized living in the past actually knew nothing about the past they were talking about. I winced when I read that line, because the character was trashing the sort of people who were doing exactly what the author was doing! That entire situation was ironic and painful enough to have a lot of the gloss stripped from the memories of this book, and I’m sad to report that reading this now that I’m older does not have anywhere near the same appeal that it did when I was a teenager.

As far as its place within the series, this is one of the essential novels. A lot is revealed about Circle Daybreak, far more than the hinting mentions that appeared in other novels of the series. And we get to take an interesting look back at Night World history, looking at the characters of Maya and Thierry. If you’re going to read the series, you really can’t afford to skip over this one. But too much sat wrong with me for it to have a very high rating, in light of all the irony and historical mangling.