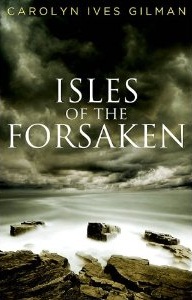 Summary: (Taken from GoodReads) The Forsaken Isles are on the brink of revolution. Three individuals are about to push it over the edge and trigger events that will lead to a final showdown between ancient forces and the new overlords of the land. Spaeth Dobrin is destined to life as a ritual healer – but as the dhotamar of the tiny, isolated island of Yora, she will be caught in a perpetual bond between herself and the people she has cured. Is it slavery, or is it love? Meanwhile, Harg, the troubled and rebellious veteran, returns to find his home transformed by conquest. And Nathaway, the well-intentioned imperialist, arrives to teach Spaeth’s people “civilization,” only to become an explorer in the strange realm of the Forsakens. These two men will propel Spaeth into a vortex of war, temptation, and – just possibly – freedom!

Thoughts: It’s a clash of cultures in Isles of the Forsaken when the Innings, a culture who hold law and legality above all else, decide it’s high time they went and civilized the heathen Adainas of the South Chain islands, bringing to them the wonders of the legal system and freeing them from their barbaric beliefs and superstitions. The reality of the situation is never so black-and-white, though. The Adainas don’t want to be ruled over by another culture. They’re perfectly happy living the way they do, and their so-called backward system isn’t as backward as the Innings would believe. Just because you don’t believe in gods and magic doesn’t mean they don’t exist, as Nathaway Talley comes to learn the more he spends time with the Adainas, and in particular a young healer girl names Spaeth.

Nathaway well and truly believes in the power of the law, holds it sacred. Spaeth, a Lashnura, heals others by sacrificing herself, binding herself to whomever she heals in order to take their ills into herself and free the hurt from their hurts. Harg is an ex-Navy captain, returned home, who finds himself the accidental leader of a rebellion to oust the Innings from his home islands and leave them as self-governing. Nathaway’s brother Corbin is the Admiral of the Navy, who wants nothing more than an excuse to crush the South Chain and control the inhabitants, to the point where he will overturn the laws that his very society is based on. Tiarch, a much-despised governer, has been working for decades to slowly convince the Innings to ignore South Chain so that they can go on governing themselves as they always have, without the need for an official policy to dictate such. It’s a good, solid, fleshed-out cast of characters, each with their own personality quirks and foibles and deep history, and all together they made this a difficult book to put down.

At the same time that powerful mundane forces are changing the course of history, so too are supernatural forces at work in the forms of the Ashwin and the Mundua, rivaling factions of gods bent on tipping the scales of balance in their favour and gaining a greater foothold in this reality.

While the story itself was not the most original I’d ever seen, it was — much like Daniel Abraham’s The Dragon’s Path — a piece of comforting and familiar fantasy fiction that soothed the soul and took me back to days where this kind of book was all I’d read. It was like comfort food to me, and the interesting cast of characters did wonders for propelling me onward through the story. Gilman’s talent really shows here, as well as in her ability to write politics without getting bogged down in them and making the plot so full of twists and turns that it’s hard to tell where you stand.

Pieces of the plot were pretty transparent from the beginning, though. It wasn’t hard to tell, for instance, that when we start off with Nathaway talking about how he wants to civilize the people of the South Chain and free them from barbarism, that the Adainas aren’t going to be nearly as barbaric as he makes them out to be, or that their superstitions are not without merit. And while there were some events that I didn’t necessarily foresee, they weren’t surprising when I did encounter them.

But overall, I’d say this is a very well-done novel, and an excellent start to a series I know I want to continue with! Gilman made an easy impression on me, and my only regret here is that I’m going to have to wait for the second book to be published. If you’re a fantasy fan who longs for a good piece of literary “home cooking”, then don’t pass over the chance to read Isles of the Forsaken.