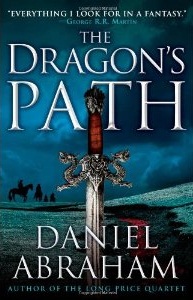 Summary: (Taken from GoodReads) Summer is the season of war in the Free Cities.

Marcus wants to get out before the fighting starts. His hero days are behind him and simple caravan duty is better than getting pressed into service by the local gentry. Even a small war can get you killed. But a captain needs men to lead — and his have been summarily arrested and recruited for their swords.

Cithrin has a job to do — move the wealth of a nation across a war zone. An orphan raised by the bank, she is their last hope of keeping the bank’s wealth out of the hands of the invaders. But she’s just a girl and knows little of caravans, war, and danger. She knows money and she knows secrets, but will that be enough to save her in the coming months?

Geder, the only son of a noble house is more interested in philosophy than swordplay. He is a poor excuse for a soldier and little more than a pawn in these games of war. But not even he knows what he will become of the fires of battle. Hero or villain? Small men have achieved greater things and Geder is no small man.

Falling pebbles can start a landslide. What should have been a small summer spat between gentlemen is spiraling out of control. Dark forces are at work, fanning the flames that will sweep the entire region onto The Dragon’s Path — the path of war.

Thoughts: I was in a mood for some good old-fashioned epic fantasy when I made the decision to start reading this book, and by the time I was about a quarter of the way through, I realized that I had found exactly what I was looking for. Abraham takes the old and familiar elements of classic fantasy and spins them into a new and engrossing tale in a complex world with richly developed races and characters. And while most of the events in the story are driven by politics, said politics are not too complex nor bogged down in protocol for most people to understand without difficulty. A good balance was struck when it comes to that, I found.

While there are many viewpoints presented over the course of the book, there are really only two main “movers and shakers”. Cithrin, a ward of the Medean bank who finds herself facing a frightening quest to save the bank’s assets, and who decides to take her fate into her own hands. Geder, a reluctant soldier who pursues philosophical matters to the point of starting world-changing events. The other characters, while fully developped and interesting, mostly revolve around Cithrin and Geder and their actions. And while it’s easy to think of the supporting cast as little more than catalysts, it’s important to keep in mind that a good deal of the time, the only reason that they’re revolving around Geder or Cithrin is because those two are incidental to deeper plots, pawns in somebody else’s game. Catalysts are powerful things; just because they don’t get a lot of time in the spotlight is no reason to discount how hugely important they are.

Abraham takes the time to develop his characters in ways that are quite interesting — and in some cases very refreshing — to see. In Cithrin’s case, we see a young and scared girl start on a path she has no control over, and by the end, we see her as a mature woman who has taken her future into her own hands by means of deceit, politics, and sound financial sense. (Seriously, this is one of the few books in the world that could possibly make banking sound like an exciting career choice!) Geder starts off as a trod-upon soldier with his head a bit too big for his hat, a pawn who wants to be a knight, and turns him into somebody whose blind obsessions may forever change the world, and accidental hero and villain all in one. Marcus seems like a simple enough mercenary until you find out about the trauma in his past, and his urge to protect Cithrin is complex and conplicated, confusing even to him while still making perfect sense. There are many characters here who start off as typical archetypes, and even stay archetypes at the end, but it’s the execution of their development that makes The Dragon’s Path a welcome change from all the “farmboy saves the world” types of fantasy. The elements of the story are familiar and comfortable, but new and shiny enough to keep us all interested.

“History is written by the winners” is a concept that’s also played with here. Not only played with but expanded. History may be written by the winners, but while that “history” is still “present”, every event is given interpretation by those who want to become the winners who will write history. Geder’s panicked and angry decision to burn down a city is reinterpreted by those in power to be a cunning tactical move made from great foresight, when in actuality it was more of a homicidal hissy fit. The pens of history don’t start moving once the present has become the past. They’re always in motion, always interpreting and assigning meaning based on what the writer wants to have happened. It’s a lot of fun to see that concept in motion in The Dragon’s Path.

After a fantastic start to what will no doubt become an equally compelling series, I can say with certainty that The Dagger and the Coin series is the classic fantasy for the new times, the kind of story that can bring back the disenfrachised to the fold, and written by an author who will keep you reading long after your bedtime. My roommate bought a copy of this book after I’d said no more than, “It’s the kind of epic fantasy that’s reminiscent of The Wheel of Time.” That isn’t to say that this series will end up as drawn out as WoT, but it really does have the same epic feel to it that I got when reading The Eye of the World for the first time. It pulls you in and won’t let you go; you won’t want it to anyway.

(Provided for review by the publisher via NetGalley.)

One comment on “The Dragon’s Path, by Daniel Abraham”