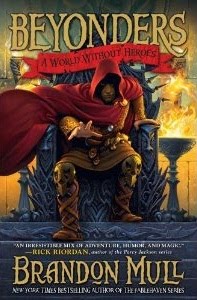 Summary: (Taken from GoodReads) Jason Walker has often wished his life could be a bit less predictable–until a routine day at the zoo ends with Jason suddenly transporting from the hippo tank to a place unlike anything he’s ever seen. In the past, the people of Lyrian welcomed visitors from the Beyond, but attitudes have changed since the wizard emperor Maldor rose to power. The brave resistors who opposed the emperor have been bought off or broken, leaving a realm where fear and suspicion prevail.

In his search for a way home, Jason meets Rachel, who was also mysteriously drawn to Lyrian from our world. With the help of a few scattered rebels, Jason and Rachel become entangled in a quest to piece together the word of power that can destroy the emperor, and learn that their best hope to find a way home will be to save this world without heroes.

Thoughts: Sometimes books live up to the hype surrounding them. Other times, I start to wonder how much I’d have to be paid to agree with the hype. A World Without Heroes was a real struggle for me to get through, and I wish I knew what everyone else is seeing in this book that I’m just missing.

While the writing style was okay, even nicely detailed in some places, I couldn’t help but think that the biggest flaw with it was the vocabulary. Given the reading level that I can assume the writing style was intended for, quite a few advanced words were thrown in rather willy-nilly, and not even in a way that would be good for vocabulary-building in youngsters. I’m talking about times where sentences would make no sense unless you already know the meaning of words that most adults don’t even frequently use. Either you’re a very smart kid reading this book, in which case the too-linear storyline will probably bore you, or else you’re sitting there with a dictionary beside you and checking it every few pages.

Or else the author, for all his acclaim, just can’t settle his style down.

Speaking of the plot, I’ve seen rulers that had more flexibility and that were less linear. Along the way, I likened this book to a video game that was one unending fetch-quest. Start at point A. Acquire item or information that tells you to go to point B. At point B, you do the thing you were told to do when you were at point A, acquire a new item or information, and move to point C. Rinse and repeat. The acquisition of the new item or information was often preceded by a puzzle of some kind. Sometimes opposition was met, but of course, the 12-13 year old heroes valiantly outsmart grown adults and save the day.

The bulk of the plot involved Jason, after being swallowed by a hippo and coming out in the fantasy world of Lyrian, trying to find the magical word that would defeat the evil emperor Maldor. An interesting concept, I’ll grant you, made more interesting by the difficulty of knowing the word in the first place: if you know it and say it aloud or write it down, you lose all knowedge of it. Thus the word was broken into syllables, clues to which are scattered all over.

You can see why I liken it to fetch-quests, huh? Jason going somewhere to find a syllable, then gets a clue as to where he might find the next clue, goes there, solved a puzzle, gets the syllable, and it begins again.

Mull’s writing also suffered by the fact that he frequently chose to tell and not show. I can’t tell you how many characters put on their Exposition Hats and told Jason or Rachel the story of their life, or a valuable piece of history. At one point, you’ve even got Jason reading from a book on Lyrian’s history. Sometimes, reading a book about someone reading a book works. This was not one of those times.

Admittedly, things did pick up somewhat after the first third of the book had passed, but in retrospect, I think that had more to do with the fact that I was getting more used to the style and story than because the story got more interesting.

I wanted to like this book. It had potential. Normally I’m all for a story about people from the modern world getting thrown into a fantasy adventure. But it just didn’t work. it had too many flaws for me to enjoy it, and even what was good was downplayed because it was only a small bright spot in the middle of so much dullness. I can’t recommend this one, no matter what the hype says.

One comment on “Beyonders: A World Without Heroes, by Brandon Mull”