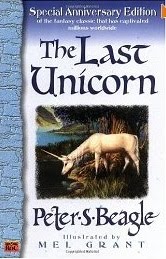 Summary: (Taken from GoodReads) The Last Unicorn is one of the great fantasy novels of the 20th Century. Since its publication in 1968 it has never been out of print, with 6 million-plus copies sold around the world, and it has been translated into more than 20 languages. The animated movie, version released in 1982, has been seen by hundreds of millions of people, and after 25 years is still showing regularly on cable and satellite.

Thoughts: Much like with my review of The Thief Lord, I had first been introduced to this story through the film version, and fell in love with it. I have had a copy of this book kicking around for years before I ever got around to reading it in full, though I had a few false false starts.

From beginning to end, though, this was a wonderful book, and unlike a good deal of book-to-movie adaptations, I felt myself being flashed back to the animated classic more than once, which was so like the book upon which it was based that if lifted most of its dialogue directly from the text itself. The story was compelling, deep in all the right places and yet still magical and fantastical enough on the surface that I didn’t close it feeling like I needed a degree in philosophy to get full enjoyment out of it.

I particularly enjoyed the way Beagle didn’t bog the work down with needless description. It was a relatively short book, telling the events of the story and nothing else, not bothering with paragraphs devoted to how the weather was or how the townspeople smelled. That isn’t to say, however, that you don’t feel immersed in the story. Rather, it means that the author knew what he wanted to say and said it, without feeling the need to say anything extra and risk padding the book with details that make you lose sight of the main purpose of the story. It’s meant to be written like a fairy tale, to capture you and make you flow with the characters on their quest. Perhaps to read the story, but not necessarily become so much a part of it that you feel you’re there.

I’m not sure I’m explaining that very well, and I’m sure I’m making it sound like the book wasn’t very good with its descriptions. I think perhaps it might be better to say that intent matters. I don’t think beagle intended this as a book that you fall into so much as a book that makes you feel like you’re reading a wonderful book.

Ultimately, this was a great read. The characters were wonderfully flawed and believable, the humour was subtle and well-done, and in its more philosophical moments, it had good messages to convey about love, existance, meaning, and why and how things are what they are. It’s the kind of book than can be enjoyed by children and adults alike, though I think children might be apt to miss some of the book’s more subtle humour. Still, well worth picking up!