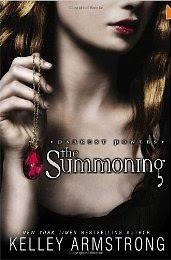 Summary: (Taken from GoodReads) After years of frequent moves following her mother’s death, Chloe Saunders’s life is finally settling down. She is attending art school, pursuing her dreams of becoming a director, making friends, meeting boys. Her biggest concern is that she’s not developing as fast as her friends are. But when puberty does hit, it brings more than hormone surges. Chloe starts seeing ghosts–everywhere, demanding her attention. After she suffers a breakdown, her devoted aunt Lauren gets her into a highly recommended group home.

At first, Lyle House seems a pretty okay place, except for Chloe’s small problem of fearing she might be facing a lifetime of mental illness. But as she gradually gets to know the other kids at the home–charming Simon and his ominous, unsmiling brother Derek, obnoxious Tori, and Rae, who has a “thing” for fire–Chloe begins to realize that there is something that binds them all together, and it isn’t your usual “problem kid” behaviour. And together they discover that Lyle House is not your usual group home either…

Thoughts: What started off fairly slowly ended up action-packed by the end, and it was a fun read from start to finish. Not a spectacularly original story, but it was still put together decently, incorporated a few twists and turns that I didn’t see coming (most of them regarding Derek), and left me wanting more.

I have to admit, I’m not much for cliffhangers, though. It’s one thing to end a book before the complete story has finished but yet the book itself can be seen to have a conclusion is one thing. This book didn’t. The ending could well have been just another chapter, and while yes, it does make me want to read the sequel to find out what happens, it also leaves me with a slightly bitter taste in my mouth, as though the primary motivation for ending it there wasn’t to hook readers but instead to hook readers’ money. End a book in the middle of a story and completionists are going to shell out $10 just to find out the rest, even if it wasn’t a great story.

Really, had the writing been tightened a bit and some extraneous detail been left out, I’m sure the two books could have been condensed into one with little trouble.

The characters were certainly interesting and filled certain niches in the story without being terribly stereotypical. As a rare treat, we actually get to see an everygirl who’s actually an everygirl, not just some “I’m pretty but don’t think so, and I have no friends despite the fact that everyone loves hanging around me, and I don’t have any talents but am involved in all kinds of extracurricular activities” girl. Chloe is short for her age, not particularly popular, not hugely interested in boys… and she doesn’t let those facts rule her life the way some girls do. I want to applaud her for it. I do applaud Kelley Armstrong for finally making a female teenage character that I can relate to. Half the YA novels I read that feature female protagonists try to make her something that everybody can relate to, but only suceed in making the character someone that can be related to only if you’re really into fashion and boys and popularity and not being a geek. So bravo, Kelley Armstrong, for that!

What saddens me most about this is that the author doesn’t really have a distinctive writing style. I could have been reading a book written by LJ Smith or PC and Kristin Cast for all it mattered, and I don’t think the style would have changed at all. Not everyone responds well to distinctive writing styles, but the ones that have them tend to be remembered long past the time that other authors are forgotten, no matter how good their stories were.

That all being said, I am looking forward to reading the sequel, and I hope it keeps me as engaged as this one did. Though it dragged a bit in earlier parts, I couldn’t stop reading during the last third of the book, always wanting to turn the page and push the characters along in their lives. It may be fluff, but it’s tasty fluff!

4 comments on “The Summoning, by Kelley Armstrong”